Chakras: Another Tool for Healing

Chakras: Another Tool for Healing

What do you think of when you hear the word chakra? Spinning wheels? Crystals? The rainbow? New age buzz word?

The chakra system is described in texts dating back thousands of years. Ancient wisdom often rings true centuries later. As the spectacular scene in All That Jazz tells us, “everything old is new again.”

Acupuncture is the ancient science of balancing chi (energy through the body) by inserting little needles into specific prescribed points in the body. The practitioner targets meridians of the body and treats deficiency or excess along a certain channel.

The acupuncturist might treat a deficient spleen channel or excessive dampness in the liver channel. This may seem a little esoteric to more traditional medical approaches, but there is an abundance of clinical trials demonstrating the efficacy for numerous conditions.

The chakra system is similar to the meridians of the body acupuncture treats. There are concentrations of acupuncture points that coincide with the nadis (the 72,000 energy channels traveling through the body) and the chakras.

Because we have seen the evidence continuing to emerge in the efficacy of acupuncture, we can extrapolate that chakras, which are associated with nerve centers, exist despite not being able to be picked up on imaging.

What is a chakra? 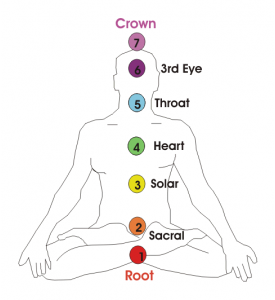 For example, have you ever noticed how your body feels when you cuddle a baby or a puppy? Your chest warms with an expansive energy. This is nourishment for the heart chakra.

When you get a “gut feeling” you shouldn’t walk down a street, you are getting information from your sixth chakra (intuition) communicating with the third chakra (self-confidence) which gives you the courage to listen to your intuition.

Like many practices, there is variation in the systems depending on the tradition you study. I have studied the work of Caroline Myss for years and had the pleasure of attending her workshops. She teaches the seven chakra system, but you might see five, nine, eleven, or other numbers of chakras referenced in other traditions.

During personal reflective moments, I have noticed patterns of deficiency (being stuck in a fear pattern) and over-activity patterns (codependency).

As Judith Anodea describes in Wheels of Life, we can have dysfunction in a chakra which, like musculature, shows up as overuse or underuse.

The goal is to clear patterns that no longer serve us in the physical, mental, and emotional realms. Clearing stuck patterns creates room for new growth. Strengthening our deficient areas allows for expansion and greater self-confidence.

You did not cause your pain or illness

Sometimes people think there was something they did or did not do to cause illness or chronic pain. This is not true.

It is very important to me that I communicate this piece clearly. In fact, it’s so important that I have not discussed chakras for the past eight years on my website. You did not cause illness or chronic pain.

Sometimes there are factors that are in our control and something could have been prevented, but sometimes we experience things that have no explanation.

Sometimes people are trying everything in their power to heal and don’t seem to gain traction. It’s not because they didn’t “wish” it or are not “manifesting.”

Please do not fall into the shaming place of “If only I had__than I wouldn’t have___.”

Please do use this information as another creative way to interact with your energy system, create new self-care habits, and strengthen your meditation practice.

The chakra system is another tool we can use to pause and notice where we might be leaking power and where we need to recharge. We can then use breathwork, movement, and yoga postures to energize areas of the body that are associated with the chakras.

For example, when energizing and grounding through your first chakra, try Mountain Pose. Visualize the soles of your feet as magnets pulling you down toward the core of the earth and feel the steadiness of your body. You can also try this in sitting with your sitz bones grounding you.